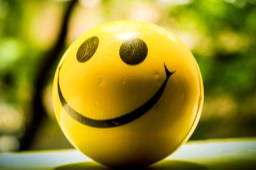 Around 60 years ago, a freelance artist from Massachusetts named Harvey Ball received a call from a local company. It had just merged with a competitor, and employee morale was going down. The company needed a fun design to lift spirits around the office.
In 10 minutes, Ball produced a bright yellow circle with black oval eyes and a happy smile. He received a one-time fee of 45 dollars (equivalent to about $375 nowadays) for creating the first smiley in modern history.

Ball’s smiley started gaining huge popularity, and it soon became clear that this simple illustration was worth millions of dollars. But he’d made a crucial mistake: Ball never filed a trademark.

In 1971, a young journalist in France, while working for a newspaper, was displeased by all the negative news in the paper, and he decided to mark the positive news for the readers with a smiley. His design, though, very closely resembled Ball's design. But unlike Harvey Ball, Franklin Loufrani filed a French trademark, as he sensed the huge marketing potential of this simple icon.

As Loufrani was very ambitious, he realized he had to spread the word about his design on a large scale, and, luckily, there was a student movement going on in France at the time, similar to the hippie movement in America. Loufrani printed 10 million stickers and gave them away for free. Not long after, companies from different industries contacted him to get the licensing permission for the design.
He secured partnerships with the candy company Mars, Levi’s jeans, and a German film giant, Agfa. As ‘the hippie era’ was followed by '80s and '90s raves, Loufrani approached DJs, and the smiley was a trend again, generating money through sales of t-shirts, flyers, and buttons.

Although the smiley had its ups and downs, today Franklin Loufrani and his son, Nicolas, own The Smiley Company, which does $500m per year in licensing deals, working with companies like Nutella, Clinique, McDonald’s, Nivea, Coca-Cola, VW, and Dunkin’ Donuts.


What about Harvey Ball? He passed away in 2001, having never earned off the smiley besides his original $45 payment. But he had no regrets; for him, the smiley had served its purpose.
Get in touch
with us!
If you have any questions, then please fill our contact form.
Office location
Studenților 9/11,
Tekwill, Chișinău
Call us
+373 692 46 464
E-mail
businessangelsmoldova@gmail.com

Who we are What we do
Join us
For Investors For Entrepreneurs For Partners
Programs News Contact
Contact
+373 692 46 464
businessangelsmoldova@gmail.com
Copyright © 2020 BAM. All rights reserved
DESIGNED BY alinamorarydesign.com
POWERED BY New Vektor Group